The roughish pirate captain Jim Riker is marooned on Isla Alejado Recuerdos in search of its legendary treasure. Allying himself with his quartermaster and friend Esma Alvarez the two pirates race against the fierce pirate hunter Capitan Garza for a prize Riker is willing to make any sacrifice to claim.

“…the immediacy of the themes and motifs used goes a long way to making the score an enjoyable, independent listen. On the strength of his score for King of The Gallows, here’s hoping that Lawrence is given the opportunity to work on a feature film.”

Drop me a line and I'll get back to you ASAP! 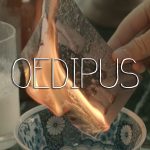